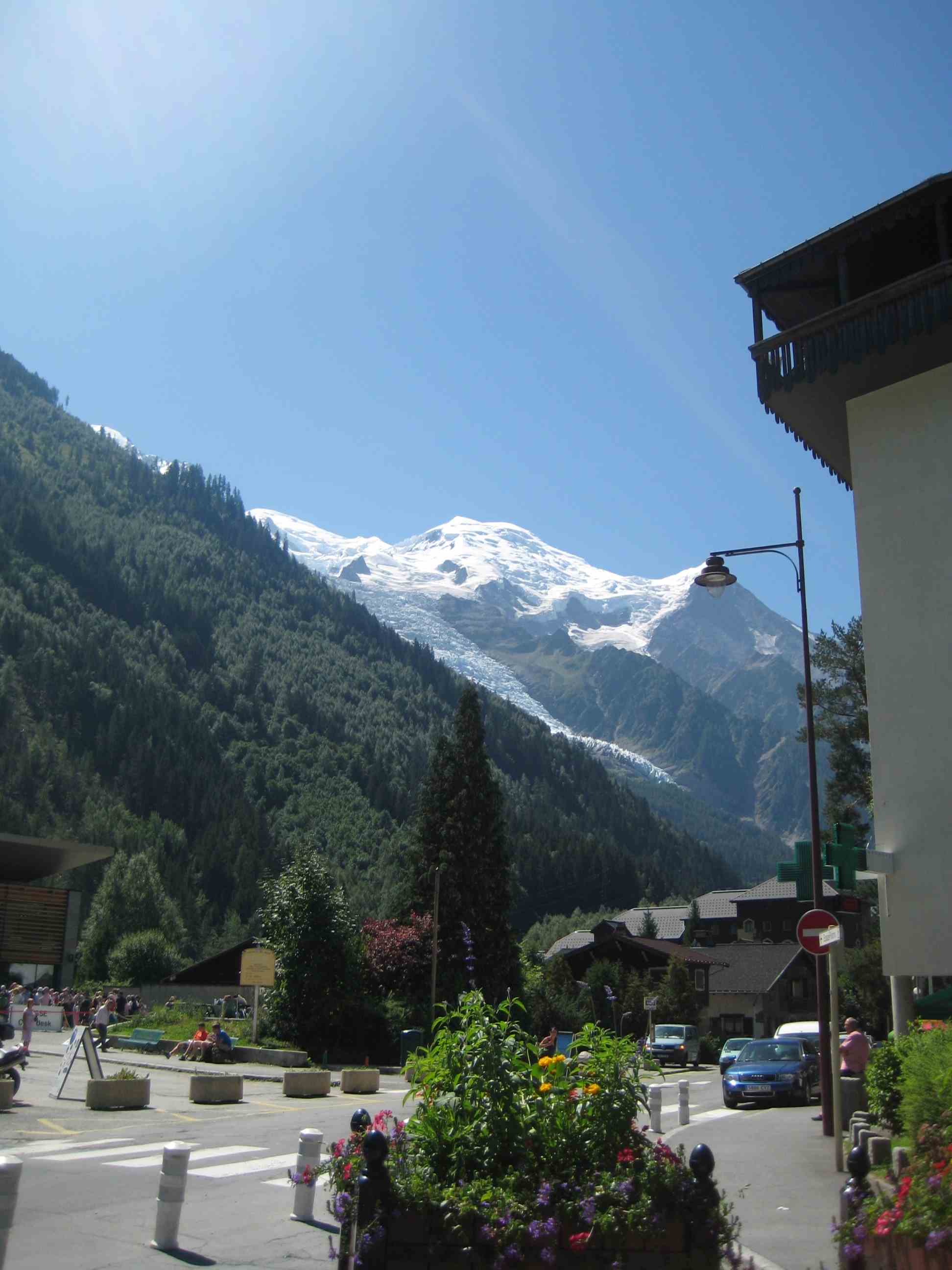 What began as a weekly shiur given by Rebbetzin Dinah Fink in Brooklyn, slowly evolved into a global program including, Shabbatonim, Chol Hamoed trips, and retreats, offering post – seminary girls of all ages and all walks of life an opportunity to come together to change and grow.

‘’I’ve been part of this program for several years,’’ says Liba.* ‘’It’s for girls who are seeking to remain inspired. Not everyone is teaching, and it is difficult to remain spiritually connected while working day in and day out.’’

Rebbetzin Fink has created a calendar of meaningful and fulfilling activities, such as the delivery of food packages for Oneg Shabbos, evening trips to places like the Living Torah Museum, and shiurim. The highlight of the programs is the annual summer retreat.

‘’This past summer was my third retreat,’’ says Rivka Leah.* ‘’I met Rebbetzin Fink three years ago, and she encouraged me to join. She said, ‘It could really change your life.’ It sounded ridiculous to me. How could ten days change your life? But it really did. When I look at the before and after of each retreat, there’s a stark difference in the way I think and act.’’

The days begin and end with a shiur by Rabbi Todros Miller, vice principal of Gateshead Seminary. The focus of the last two retreats were the thirteen Ikrei Emunah (principals of faith). ‘’The shiurim are brilliant,’’ says Shainy,* originally of London and now a madrichah in Israel. ‘’Rabbi Miller dispels many kindergarten myths about our relationship with Hashem. I used to believe in Hashem now I know there’s a G-d.’’

‘’You feel that you come to your own conclusions with the shiurim. You’re not being told something in a preachy style, which is very thrilling, ‘’ explains Michal,* who is an active participant and has attended two summer retreats. ‘’The Ani Maamins now have a whole different meaning for me. It gave us foundation in emunah, which no one gets in school, because it’s geared to us-mature young women. And it’s something we can hold onto the entire year.’’

Following the shiur and breakfast, the group hikes in obscure mountainous regions where they do their fair share of singing, learning and enjoying good old-fashioned camaraderie. Other days there are outdoor activities such as boating. On each hike or bus ride, Rebbetzin Fink gives a short shiur.

‘’This year many of them were focused on preparing for marriage,’’ Shainy says. ‘’We would sit on a mountain near the Kinneret and she’d share these beautiful thoughts. …It’s sophisticated stuff. Things come up and we discuss them and learn so much.

‘’Looking over the Kinneret, singing ‘Tzama Lecha Nafshi,’ running down the mountain trails singing – the combination of nature and incredible  shiurim  while you are between heaven and earth is an ethereal experience.’’

Each evening Rabbi Miller’s shiur is followed by supper and a light and enjoyable night activity such a laughter therapy or a talent show.

‘’Shabbos is amazing,’’ Shainy continues.  ‘’We sing the most beautiful zemiros. Rebbetzin Fink explains the background and beauty of each zemer in a nutshell. For example, she gave us a deeper understanding of ‘Yonah Matz’ah Bo Mano’ach’ and how the neshamah seeks menuchah on Shabbos. After last year’s retreat in the Alps, I returned on a high and went back to work. I thought, ‘How can I still be that person I became?’ So each Shabbos I sang the same tunes for zemiros and had in mind the lessons from them that Rebbetzin Fink had taught.’’

‘’Shabbos became a different experience for us,’’ explains Rivka Leah. ‘’I took upon myself not to read any fiction on Shabbos because of it. More than that, though, for those of us living away from family, Shabbos is the hardest day of the week. Since going on the retreats, where Shabbos is the most beautiful experience, every Shabbos when I’m feeling lonely, I can tap into those special Shabbosos, and then I’m no longer alone.’’

There is tremendous achdus,’’ says Liba. ‘’There are girls from Brooklyn, Monsey, Canada, Brazil Switzerland, France, England, and Eretz Yisrael. I was in my mid thirtees and much older than most girls when I went on the retreat two years ago, but we were all in it together. All of us want to move forward, onward, and upward, the mantra of Lechu V’Nelcha, what those words actually mean.’’

‘’It felt nice to form a new circle of friends because we no longer have the same relationships with our old friends, who are married and have moved on in life,’’ agreed Michal. ‘’We stay in touch all year even though we’re from all over the globe. I met girls I never would have met any other way.’’

I can say that now my closet friends are girls I met on the retreat,’’ says Shainy. ‘’Many of us get together throughout the year.’’

‘’Everyone has their personal challenges,’’ remarks Rivka Leah, ‘’but on the retreat everything is placed in a positive light because we’re no longer going through our nisayon on our own. We have a network of friends, and we can support each other.’’

‘’One of the most positive aspects of the retreat is the chance to get away from everything,’’ says Michal. ‘’We’re on a different planet where we can recharge our batteries. When you look back at those pictures, sitting on a mountain with no-one around, you can put yourself right back there. The inspiration lasts for months afterward.’’

‘’Just as Shabbos is an oasis during the week,’’ Shainy adds, ‘’we try to recreate that concept during our entire retreat. We don’t bring work along. Just as there are things we can’t speak about on Shabbos, there are certain topics, like shidduchim, that we avoid; we like to joke, ‘Nisht oif Lechu V’Nelcha geredt.’ Everyone is very open to each other, though. We are not embarrassed to speak about anything that is on our hearts and minds.

‘’The French Alps are really beautiful. On one hike, we were walking through a forest on the mountain. All of a sudden, we saw light streaming through the trees. We followed it and came to a clearing. I had never seen such a beautiful sight in my life.

Questions like this stoke many a fiery discussion during the retreats. ‘’Rebbetzin Fink explained to us that this is a glimpse into your potential, who you could become,’’ says Shainy.  ‘’After each retreat, we try to change small things for the long term. This made me a different person. I want to serve Hashem and have such clarity.’’

‘’Lechu V’Nelcha and particularly the retreat, gives continuity to my Bais Yaakov education,’’ says Michal. ‘’The shiurim are geared toward us, women who are out of school, in the work force, dealing with what we deal with. It gives us solid hashkafah, and it has kept me grounded and moving in the right direction.’’

‘’After the retreat, Rebbetzin Fink gives us a weekly teleconference shiur on emunah that keeps the retreat alive, notes Rivka Leah. ‘’For example, during a recent shiur Rebbetzin Fink stressed that Hashem’s love for us is infinite and unconditional. She said:

‘’We must strengthen ourselves in that knowledge because when we experience a challenge, we tend to feel that the nisayon is indicative of Hashem’s rejection of us. The yetzer hara makes us reflect that feeling of rejection by encouraging us to reject Hashem. We should rather introspect during times of challenge, because that process brings us closer to Him and His love for us.’’

For many participants, the changes they make after the retreat are simply manifestations of the inner transformations that have taken place. One participant came to realize that living in an apartment on her own was not spiritually proactive for her, and she now wants to become a madrichah and do something more meaningful.

Shira* came to the realization that her job was not suited to her and actually hindered her growth. The retreat gave her the resolve to leave the job and find more suitable employment.

‘’My entire outlook on life has changed,’’ says Rivka Leah. ‘’I always remember how we were sitting on the French Alps – it was so quiet, no one was around, and we were singing ‘Yedid Nefesh.’ At that moment we felt so clearly that Hashem is our true Yedid Nefesh.

‘’These moments stay with you forever. We don’t feel the same despair that used to weigh us down because we can now remember those times and feel that Hashem is our loving father, our Yedid Nefesh.’’

‘’The experience is life-altering,’’ affirms Liba, ‘’because it also allows us to maintain a connection with mechanchos whom we have the opportunity to meet. To me, being part of Lechu V’Nelcha, I can clearly see the difference in my hashkafah and dress code.

‘’Even though I am now married with a baby, baruch Hashem, I still think of myself as a Lechu V’Nelcha girl. My husband who is about my age, says he saw the difference between me and many girls he met who weren’t connected and focused and had no anchor.

‘’I think of the Rabbi Miller’s and Rebbetzin Fink’s shiurim all the time. They come back to you in flashes of inspiration. The retreats helped create uplifting moments, and I tap into them even now, three years later.

Lechu V’Nelcha has opened doors of opportunity and transformation. It offers a new mindset, a strong social network, the ability to stay connected to your true ratzon and life-goals and the opportunity for connections to mentors such as Mrs. Chani Juravel, Mrs. Debbie Greenblatt and more.

As Rebbetzin Fink says poignantly, ‘’Instead of life being a waiting game, fore these young women it’s become a living game.’’

*Not their real names

Write up based on an article written for the Binah magazine. 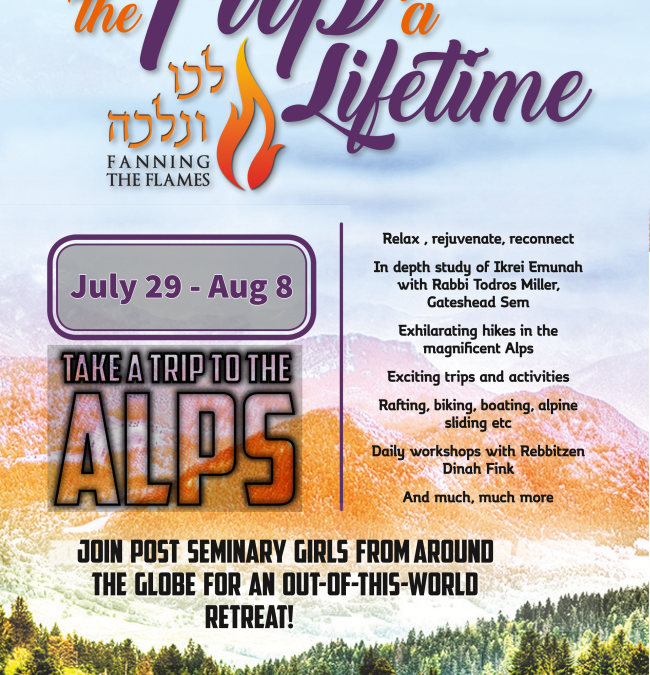 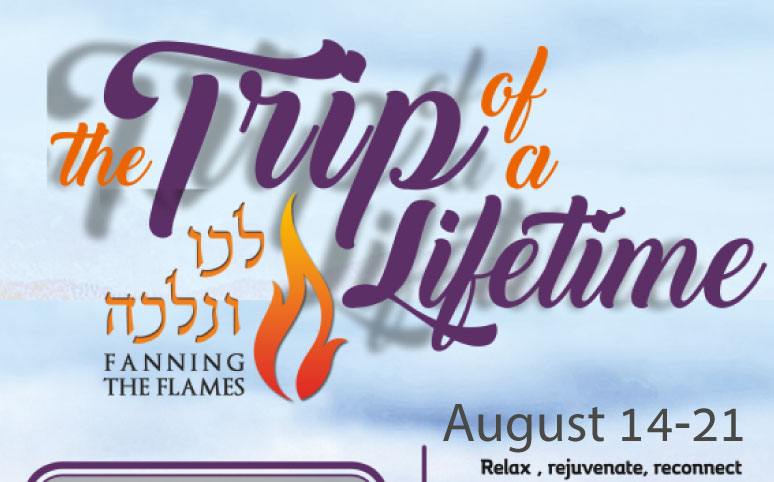 Lechu V’Nelcha’s summer retreat was a life altering experience! The retreat was based in the heart of the magnificent Austrian Alps, in a beautiful hotel surrounded by the breathtaking beauty of Hashem’s world.  The girls enjoyed upscale accommodations, an abundance... 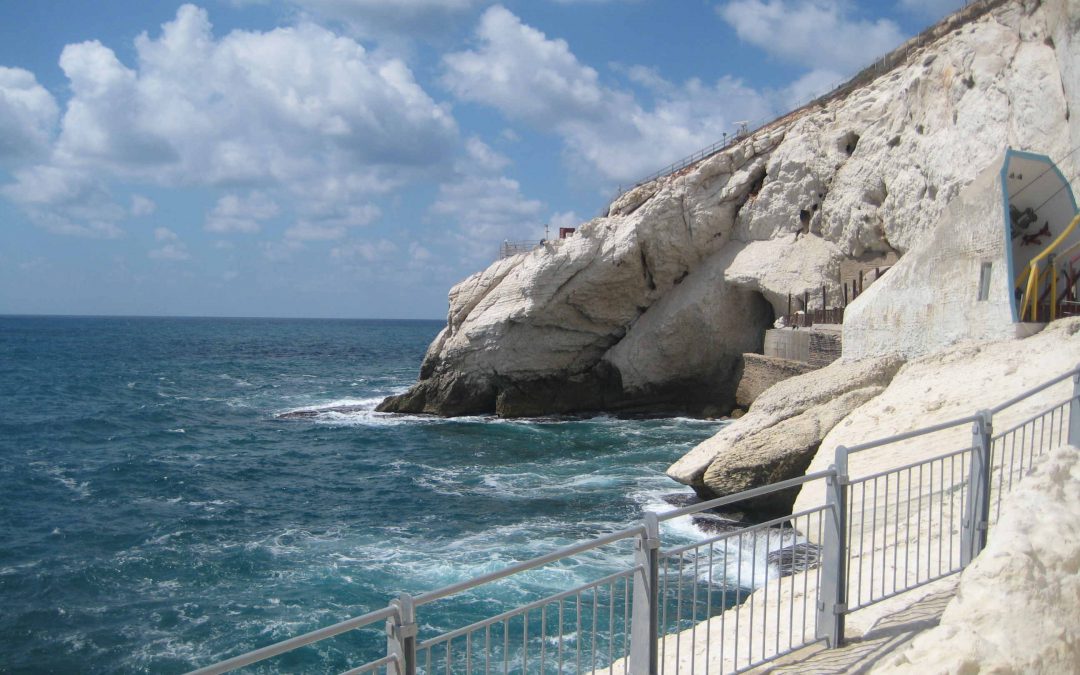 It's a break from routine. It's a getaway to green hills, blue skies and mountain air. A whirlwind of good times, good learning, and good friends. It's a trip of connection. It's a journey to a world of harmony, striving, and joy. It's a chance to just be. It's a...